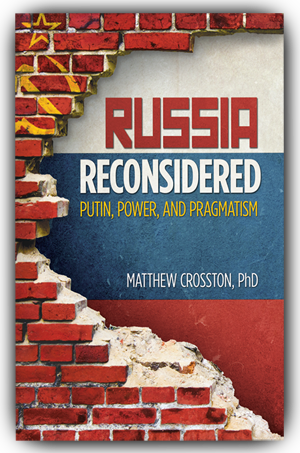 A Roadmap for Reshaping the American Perspective on Russia

Written by America’s seminal expert on the Russian agenda and Vladimir Putin, Russia Reconsidered: Putin, Power, and Pragmatism establishes Dr. Matthew Crosston as the voice for a new way of thinking on US-Russia policy.

In today’s America, Russia is still viewed as a villain of foreign relations. With many Americans still conscious of the past memories during the cold war era, citizens have an outdated orthodox perception and a limited understanding of Russia and how the country has advanced over the years politically, culturally, and economically.

Dr. Crosston, Executive Vice Chairman of Modern Diplomacy and Senior Doctoral faculty at the American Military University, brings an accessible, understandable, and "sane study of Russia" to the stage in Russia Reconsidered. Not seeking to push an agenda but rather to present ideas and seek truth, the author and his contributors offer their expertise on influential factors from space to Syria, and cyberwarfare to failed diplomacy. Building on his 28-year career in international policy and intelligence, Dr. Crosston’s new book triumphs as a roadmap to a modern mindset informed by cross-cultural intersections.


What People Are Saying ...

"Russia Reconsidered: Putin, Power and Pragmatism casts doubt on the myths and stereotypes about Russia prevalent in the West and in the United States."
— Sergey Fedorchenko, PhD | Department of Political Science and Law, Moscow State Regional University

"The book is a powerful argument against many oversimplified, black and white, one-sided interpretations of the current crisis between Russia and the West. The collection of essays offers a remarkable diversity of views, narratives and perceptions; a valuable source for those trying to get beyond usual stereotypes and conventional wisdom."
— Andrey Kortunov | Director General of the Russian International Affairs Council